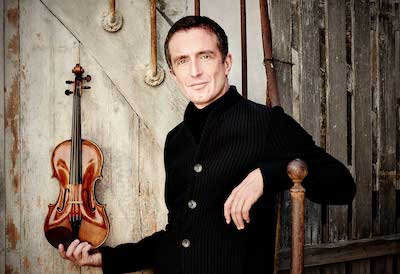 Tedi Papavrami is considered one of the greatest talents of his generation. Born in Albania he was introduced to the violin at the age of five by his father, a brilliant teacher, Tedi’s progress was sensational. Just three years after taking up the violin, he was playing a concert of Sarasate’s Gypsy Airs with the Tirana Philharmonic Orchestra. At eleven, he gave a public performance of Paganini’s Concerto N. 1. Invited to Paris, the young virtuoso became a student of Pierre Amoyal’s at the Conservatoire National Supérieur de Paris. In addition to many concerts, at this period he made occasional appearances in TV programs.

In the wake of a slew of prizes, in the 1990s Tedi started carving out a career as a soloist and chamber musician, collaborating as a soloist with orchestral conductors of the stature of Kurt Sanderling, Antonio Pappano, Armin Jordan, Emmanuel Krivine, Manfred Honeck, François-Xavier Roth, Thierry Fischer, Gilbert Varga, and Matthias Aeschenbache, among others.

On the chamber music side, he was a member of the Quatuor Schumann, a piano quartet, for nine years. In concert he appears with partners of the calibre of Philippe Bianconi, Nelson Goerner, Maria João Pires, Martha Argerich, Gary Hoffman, Marc Coppey, Paul Meyer, and Lawrence Power.

In 2014, Tedi Papavrami was awarded the year’s ‘Solo Instrumentalist’ Diapason d’Or and a Choc Classica 2014, for a disc devoted to works for solo violin by Eugène Ysaÿe. A passionate writer, he took up the mantle of translating the works of author Ismail Kadare, following the death of the Albanian translator Jusuf Vrioni, in 2000. This foray into the literary sphere continued in 2013 with Fugue pour Violon Seul, published by Robert Laffont. Unanimously hailed by the Press, Tedi’s autobiographical narrative recounts his past as a child prodigy in Albania, followed by his flight to the West and to freedom.

He plays on a 1727 Stradivarius, the Reynier, lent him by the Louis Vuitton Moët Hennessy group.