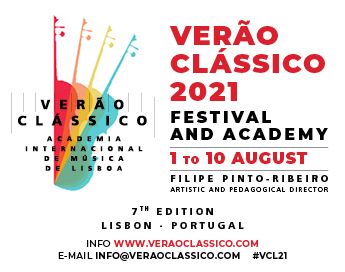 Festival and Academy VERÃO CLÁSSICO is a project created in 2015, including a performative axis and an educational axis, namely the Festival, with daily concerts, and the Instruments and Chamber Music Masterclasses.

VERÃO CLÁSSICO seventh edition will be held from 1st to 10th August, 2021, in Lisbon. It will include daily concerts and Masterclasses with the participation of musicians and teachers from some of the most prestigious international institutions and soloists of the world’s best orchestras.

For the 2021 edition of VERÃO CLÁSSICO Masterclasses, are already confirmed renowned musicians and teachers from famous Conservatories and Universities, such as Berlin, Paris, Oslo, Lausanne, Brussels, Cologne, Strasbourg, Geneva and Madrid and from outstanding orchestras like the Berlin Philharmonic Orchestra, Orchestre de Paris and Bavarian Radio Symphony Orchestra of Munich:


VERÃO CLÁSSICO Professors will tutor Masterclasses on technique and musical interpretation, which will take place simultaneously in several rooms of Museu Nacional dos Coches. For practice and rehearsals, young musicians will also have available music rooms in Lisbon Metropolitan Orchestra and in Lisbon National Conservatory.

All participants in the Masterclasses are candidates for VERÃO CLÁSSICO Awards, whose jury is composed by the Masterclasses teachers. These prizes, in the form of concerts included in musical seasons held in Portugal, have an important role of motivation and recognition of talent and the participation by the young musicians during VERÃO CLÁSSICO. Some of the young musicians awarded in the previous editions already had the opportunity to present themselves as soloists with Portuguese orchestras – Orquestra do Norte, Orquestra Filarmonia das Beiras and Orquestra Clássica do Sul – and in international music festivals.

VERÃO CLÁSSICO, thus, promotes education and public presentation of young talents, encouraging and supporting them to build their careers, and at the same time, encouraging cultural exchange among participants of different nationalities. To Portuguese students it offers, in their own country, a platform for development of their artistic level and the exceptional possibility of learning with the most prestigious international teachers, worldwide references of their instruments.

The educational axis of VERÃO CLÁSSICO is complemented by the performative axis, formed by the Chamber Music Festival which, during the ten days of the Festival, will present daily concerts with great works from the music repertoire from the 18th to 21st centuries: four MasterFest concerts, with the presence of musicians/teachers, as well as six TalentFest concerts, in which the young VERÃO CLÁSSICO musicians, already awarded nationally and/or internationally, will participate.

Festival and Academy VERÃO CLÁSSICO assumes itself as an unique artistic and pedagogical initiative in Portugal, a project of cultural excellence open to all audiences.