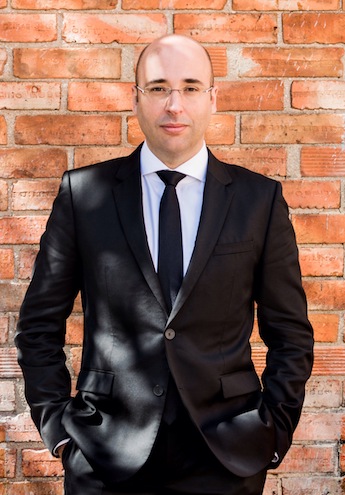 Considered one of Europe's leading pianists of his generation, Filipe Pinto-Ribeiro is celebrated for his poetic sensibility, musical intelligence and consummate artistry.

Born in Porto, he studied in various countries before becoming a disciple of Lyudmila Roshchina at the Tchaikovsky Conservatory in Moscow, where he obtained a Doctorate in Musical Performance in 2000, with maximum classifications.

Playing the whole spectrum of the piano repertoire, from the Baroque to Contemporary Music, he has premiered many works from composers such as Dmitri Shostakovich, Marcelo Nisinman, Eurico Carrapatoso and Sofia Gubaidulina.

As a soloist, he is frequently invited by the most important orchestras from Portugal and also from other countries, such as Russia, Spain, Cuba, Slovakia, Armenia or Belgium, collaborating with conductors John Nelson, Emilio Pomàrico, Charles Olivieri-Munroe, Boguslaw Dawidow, Rengim Gökmen, Daniel Smith, Marc Tardue, Misha Rachlevsky e Christoph Poppen Dmitri Liss and Mikhail Agrest, amongst many others.

Filipe Pinto-Ribeiro is the founder (2006) and artistic director of the DSCH - Schostakovich Ensemble, based in Lisbon’s Centro Cultural de Belém. The Ensemble has recorded for Mezzo channel and performs regularly across Europe. 2018 marked the beginning of Shostakovich Ensemble's discography, with the world's first recording of Dmitri Shostakovich's Complete Chamber Music for Piano and Strings, recorded by Filipe Pinto-Ribeiro, Corey Cerovsek, Cerys Jones, Isabel Charisius and Adrian Brendel. This double CD album, edited by Paraty label and worldwide distributed by Harmonia Mundi PIAS, is receiving numerous accolades from the press: 5 Diapasons, Opus D’Or, Best Album of 2018 Classique News, maximum classifications from the German magazine Das Orchester, the Dutch magazine Luister, the Belgian magazine Crescendo and from Kulturradio Radio Berlin-Brandenburg, great reviews from magazines Gramophone and Scherzo, The Guardian, among others.

He has released several CDs, highly appreciated by music critics, featuring works by Bach, Scarlatti, Seixas, Beethoven, Wagner, Debussy, Ravel, Mussorgsky, Scriabin, Prokofiev, Shostakovich, etc. His CD PIANO SEASONS, recorded in France for Paraty and distributed by Harmonia Mundi, received worldwide acclaim - BBC Music Magazine (4 stars), Klassik Heute (10/10), BR-Klassik (CD of the week), among others. It includes “The Seasons, opus 37-bis” by Tchaikovsky; the first recording of the new piano version of Piazzolla’s “Four Seasons of Buenos Aires”, composed by Marcelo Nisinman for Filipe Pinto-Ribeiro; and “Four Last Seasons of Lisbon”, by Eurico Carrapatoso, a cycle also dedicated to the pianist and having its first recording in this double CD.

Filipe Pinto-Ribeiro is often invited as artistic director of music festivals. He is the artistic and pedagogical director of Festival and Academy VERÃO CLÁSSICO - CLASSICAL SUMMER at Lisbon’s Centro Cultural de Belém,  which he founded in 2015 and includes concerts and masterclasses with the participation of teachers and musicians of great reputation, soloists of the world greatest orchestras and from some of the most prestigious international teaching institutions, and young musicians from all over the world.

Besides his busy performing career, Filipe was Piano and Chamber Music Professor for more than one decade at some Portuguese Universities and frequently gives Masterclasses.

Filipe Pinto-Ribeiro was named a Steinway Artist in 2014 by Steinway & Sons.