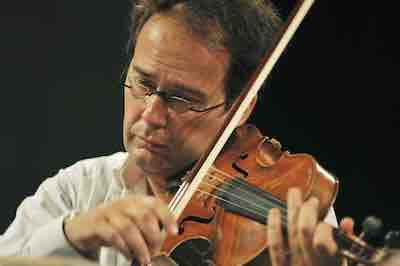 Franco-Swiss musician, Miguel da Silva was born in Reims. He started studying at the Conservatoire of his native city before moving to Paris where he was a student at the Conservatoire National Supérieur de Musique, with Serge Collot. In Paris, he was awarded First Prize in chamber music and also for viola, unanimously with special vote by the jury). In 1985 he won the First Prize of the International Chamber Music Competition in Paris.

His passion for string quartet led him to found the Ysaÿe Quartet, with 3 of his friends, studying with the Amadeus String Quartet. After winning the First Prize in Evian, the members of the Ysaÿe Quartet soon started an international career that led them throughout the world, from Japan to America. This brilliant career of thirty years was brought to an end in January 2014, after a major series of concerts, with a special emphasis on the music of Beethoven.

In the past few years, engagements either as a solo player or with his quartet have led him to the Wigmore Hall in London and most of the greatest concert halls in Europe (Munich/Herkulesaal, Venice/Teatro della Fenice, Copenhague, Helsinki, Amsterdam/Concertgebouw, Hannover, Basel, Baden-Baden, Salzburg/Festspielhaus, Leipzig) and he has toured in Belgium, USA, Japan and Italy.

Parallelly to his CDs with the Ysaÿe Quartet, Miguel da Silva has recorded under the labels Accord, Valois-Auvidis, Philips, Harmonia Mundi, etc. He also founded his own record company: Ysaÿe Records, and under the label Nascor, offers young musicians the opportunity to make their very first recording.

In 1994, he started to teach a class of String Quartets and has since then been teaching a whole new generation of French and European quartets and chamber music groups.

In 2008, he was appointed as a Professor in Luebeck’s Musikhochschule (Germany)- where he took over Walter Levine's position, as a tutor at the European Chamber Music Academy (ECMA) and for Vienna Music University's Summer Academy (ISA).

In 2009, he joined Geneva’s Haute Ecole de Musique, in Switzerland, as a Viola and Chamber Music Professor, and became the artistic director of Villecroze’s Académie Musicale, in France.

He has recently been appointed Master in Residence at the Queen Elizabeth Music Chapel, in Belgium, where he joined José Van Dam (voice), Augustin Dumay (violin), Louis Lortie (piano) and Gary Hoffman (cello).