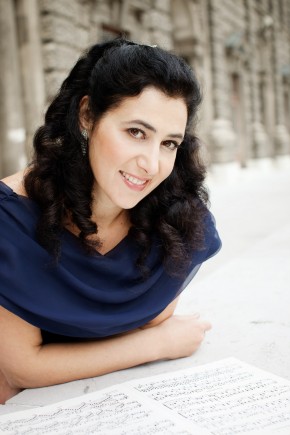 Milana Chernyavska has played in many significant concert halls such as the Musikverein in Vienna, Concertgebouw in Amsterdam, Berlin Philharmonic Hall, Suntory Hall in Tokyo, Wigmore Hall in London, Carnegie Hall in New York, and took part in many concert tours and festivals in Europe, United States and Asia. She regularly plays at such festivals as Lucerne Festival, Salzburg Festival, Rheingau Music Festival, the Piano Festival Ruhr, where she received the prestigious Alfred Brendel Prize.

In addition to her solo career, Milana Chernyavska regularly works with well-known artists such as Julia Fischer, Lisa Batiashvili, Daniel Müller-Schott, David Garrett and others.

The artist has recorded over twenty CDs for well-known labels as DECCA, EMI, Sony and Naxos. Many of her CDs won international awards such as Diapason d'Or, BBC Music Magazine Prix and the Pizzicato Super Sonic Award.

She also received the most important media award in Germany - the "Echo Prize".

As a versatile artist, she works as a piano professor at the University of Music and Performing Arts in Graz. She is also professor at the International Music Academy in Liechtenstein. Furthermore, she leads numerous international masterclasses worldwide and is an acclaimed juror at many important competitions such as ARD in Munich, Busoni in Bolzano, Mozart Competition in Salzburg, among others. Her students are regularly winning first prizes at prestigious competitions such as Santander, Busoni, Maria Canals, Vendom Prize, Malta Piano Competition and many others.

Milana Chernyavska studied with Irina Lipatova and Valerij Sagajdachnij at the State Tchaikovsky Conservatory in Kiev. She completed her Master Studies at the University of Music in Munich with Prof. M. Höhenrieder and Prof. G.Oppitz. Her important musical influences and inspirations are Alfred Brendel, Ana Chumachenco and Dmitry Bashkirov. She has many artistic achievements and was awarded numerous prizes at national and international competitions. One of her biggest achievements was a cultural award from her home country - Honored Artist of Ukraine.

Since the 2021, Milana Chernyavska is the Professor of the Piano Chair Fundación Banco Santander, following Dmitry Bashkirov, at the Reina Sofía School of Music in Madrid.