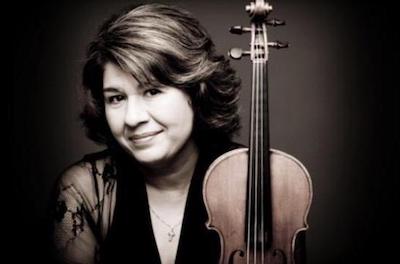 Mihaela Martin, who was born in Romania, is one of the most outstanding violin virtuosos of her generation. Her father gave her first violin lessons when she was five years old. She later studied with Stefan Gheorghiu, a pupil of George Enescu and David Oistrakh.

At the age of 19, Mihaela Martin won second prize in the International Tchaikovsky Competition in Moscow, which was followed by further main prizes in Montreal, Sion and Brussels. Being awarded first prize in the International Violin Competition of Indianapolis launched her international career. She has performed with leading orchestras such as the BBC Symphony, the Royal Philharmonic and the Montreal Symphony Orchestra, as well as the Mozarteum Orchestra of Salzburg and the Leipzig Gewandhaus Orchestra. She has worked with conductors such as Kurt Masur, Nikolaus Harnoncourt, Charles Dutoit and Neeme Järvi. In the past season, Mihaela Martin not only performed as a soloist but also appeared at chamber music festivals in Italy, Norway, the United Kingdom, France, Israel, Germany, Greece, Romania and Switzerland. Together with Conrad Muck, Mikhail Barenboim and Frans Helmerson, she is a permanent member of the Michelangelo String Quartet, which she helped to found in 2003.

Mihaela Martin is Violin Professor at the University of Music in Cologne, Kronberg Academy, Barenboim-Said Akademie, in Berlin, and gives masterclasses throughout the world. She is a regular jury member at major international competitions such as the Queen Elisabeth (Belgium), Indianapolis (USA), Enescu (Romania) and Tchaikovsky (Russia).

Mihaela Martin plays a violin by J. G. Guadagnini that dates from 1748.