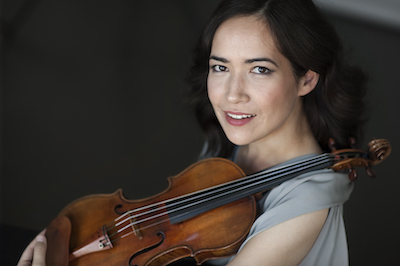 One of today’s most sought-after violinists, Munich-born Viviane Hagner is widely recognized as a performer of both the canonic repertoire (from Bach to Berg) and the contemporary literature for the instrument. In the latter, she is particularly associated with Sofia Gubaidulina, Witold Lutoslawski, Krzysztof Penderecki, Unsuk Chin (of whose 2002 Grawemeyer Award winning Violin Concerto she is the dedicatee), Simon Holt and Christian Jost.

Viviane was only 13 when she was the soloist in a joint concert of the Berlin and Israel Philharmonics in Tel Aviv, in 1990, conducted by Zubin Mehta. In 2004 she was the recipient of the prestigious Borletti-Buitoni Trust Award, enjoying a four year support from the Foundation and receiving advice from Mitsuko Uchida.

is also a devoted chamber musician and in this guise she will often appear with her pianist sister Nicole.

She is the founder and director of Krzyzowa Music (in Silesia, Poland), a festival which functions as a forum for interculturality and the exchange of ideas, while also enabling the coming together of international artists and young professionals.

As a pedagogue, Viviane first started teaching in 2009, at Berlin’s Universität der Künste, switching in 2013 to Mannheim’s Hochschule, where she remains to this day, while also giving masterclasses.