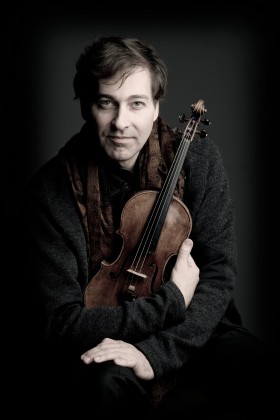 Hailed as ‘today’s quintessential French violinist’ Philippe Graffin was discovered by Yehudi Menuhin, who, upon hearing him in the Fritz Kreisler competition in Austria, invited him to make his debut recording with the RPO.

Philippe’s unique performing career has taken him to five continents and reflects his ever-questing mind. This can be heard in his acclaimed, prolific discography which ranges from Mozart to works especially written for him. Included are 30+ concertos, from Saint-Saëns (initiating Hyperion’s Romantic Violin Concerto series) to the rediscovery of Fauré’s Concerto; original and forgotten versions of Chausson’s Poème, Elgar’s Concerto and Ravel’s Tzigane; and also concertos by Britten, Dvorak and Coleridge-Taylor – the latter recorded in South Africa and performed at the BBC Proms; as well as concertos by the composers Rodion Shchedrin and Vytautas Barkauskas.

Philippe champions composers of our day including Dutilleux and Saariaho. Pieces written for him include those by Vytautas Barkauskas, Philippe Hersant, David Matthews, Yves Prin, Rodion Shchedrin, Peter Fribbins, and Marcelo Ninsinman.

In November 2014, Graffin created a project with Gerard Depardieu at Flagey, Brussels, for Belgian television mixing poetry and music, which was later made into a documentary, “Graffin-Depardieu, la nuit leur appartient.” A pupil of Philippe Hirschhorn and Josef Gingold, himself a renowned student of Eugene Ysaÿe, Philippe premiered a recently discovered 7th Solo Sonata by Ysaÿe, which he completed and edited for Schott. Mr Graffin appeared in two recent documentaries made about the great Belgian violinist: Ysaÿe is Not Dead (Belgian television, RTBF) and his own original film Ysaÿe’s Secret Sonata (YouTube). Philippe curated festivals around Ysaÿe at the Wigmore Hall, in The Hague with the Residentie Orkest and created “Ysaÿe’s Knokke”, in Belgium, where many of Ysaÿe’s compositions originated.

Philippe was artistic director of ‘Consonances’ chamber music festival in St-Nazaire, France for 25 years. In 2019 he created ‘Traces’, in Brussels, a festival devoted to neglected works, often by composers whose lives were crushed during the Holocaust. The Festival aims to also present young artists performing innovative programmes.