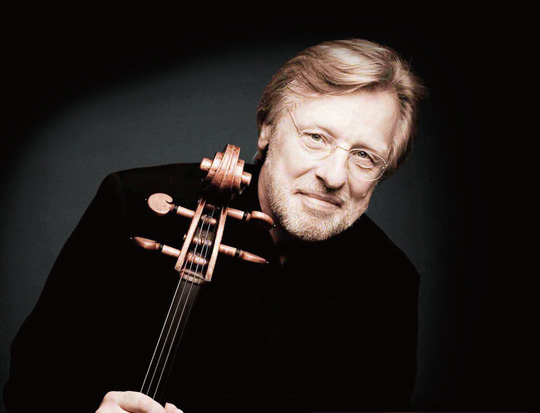 One of our time’s most respected musicians, Swedish cellist Frans Helmerson began his musical training with Guido Vecchi in Gothenburg, before moving on to study with Giuseppe Selmi in Rome and William Pleeth in London. Sergiu Celibidache and his mentor Mstislav Rostropovich also played a very influential role in his artistic development.

In 1971, he won the renowned Cassado Competition in Florence – the first of many distinctions. Tours have taken him to other countries in Europe as well as to Japan, Russia, South America, Australia, New Zealand and the USA.

Frans Helmerson was a soloist with many of the finest conductors, including Seiji Ozawa, Colin Davies, Neeme Järvi, Evgeni Svetlanov, Esa-Pekka Salonen, Herbert Blomstedt, Sergiu Comissiona, Frübeck de Burgos, Kurt Sanderling and Mstislav Rostropovich, and received outstanding critical acclaim for his concerts and recordings. His recording of Dvořák’s Cello Concerto with Neeme Järvi and the Gothenburg Symphony Orchestra was acknowledged as the “best recording currently available on the market”. His recording of Shostakovich’s Cello Concerto No 1 is also highly praised.

Frans Helmerson’s love of chamber music is another important driving force in his musical endeavours. He is a regular guest at the major European festivals, including the Verbier Festival, the Pablo Casals Festival in Prades and the Ravinia Festival, and spent many years as the artistic director of the Umea-Korsholm International Chamber Music Festival. In 2002 he founded the Michelangelo String Quartet with Mihaela Martin, Stephan Picard and Nobuko Imai, who were later joined by violinist Daniel Austrich in 2012.

In addition to his career as a soloist, chamber musician and conductor, Frans Helmerson taught for several years as a professor at the conservatories in Cologne and in Madrid. Since 2011/12, he has been teaching as a Guest Professor at the Hanns Eisler School of Music in Berlin. 2016 saw him gain an additional professorship at the Barenboim-Said Akademie in Berlin.

Frans Helmerson has been teaching on the Kronberg Academy Study Programmes as a Principal Professor since 2006.

He plays a cello by Stefan-Peter Greiner.